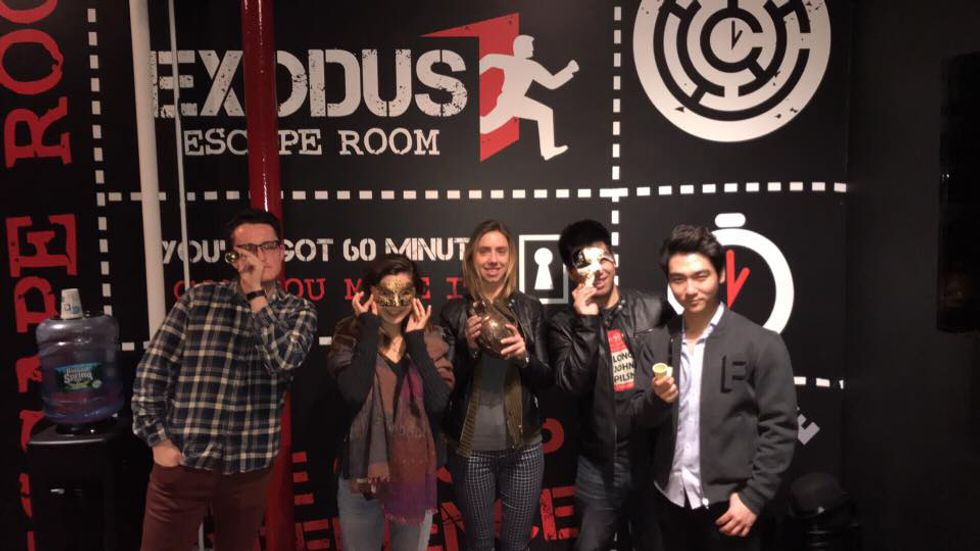 The best escape the room in NYC is hiding in Koreatown

Exodus Escape the Room is a hidden gem nestled on the sixth floor of Koreatown high rise.

The game really illustrates how different people on any team are valuable and encourages players to celebrate diversity.

Escape the rooms have swept the nation with a growing popularity. Alluring to corporate teams, sports teams, roommates, friend groups, and more, group puzzle solving seems to be the new Happy Hour. Recently, the team at Topdust sought to uncover the best escape the room in New York City and I'm happy to report that we've found it. Nestled above Koreatown on the sixth floor or an ordinary building is a puzzle-solver's oasis: Exodus Escape The Room.

Exodus Escape The Room first started in Southern California. As it grew in popularity it grew in location as well. Currently, there are six locations: San Bernardino, Rowland Heights, Rancho Cucamonga, New York City, Monterey, and Anaheim Hills. Exodus Escape The Room takes the traditional escape the room a step further with the integration of technology into the traditionally physical past-time. Typically, escape the rooms operate with locks and keys while Exodus Escape The Room drew us in with more of a multi-media experience. Everything down to the story, characters, and details of the room, put us in the world of the game and provided a getaway from reality for the 37 minutes it took us to escape the room.

Check out the trailer for Exodus Escape The Room.

Most of the team had low expectations. A fun group outing to break up a mundane work week was the only promise, but what we took away was much more. We were greeted by one of the employees. Warm and welcoming, Tom our host for the night, recited the rules to us, welcomed us into the space and got us really excited for the next hour. While building the suspense for what the next hour would entail, he also gave nothing away and assured us that he'd be easy to reach via the two cameras in the room in the event we needed help. We started off by scouring the room for clues and got off to a quick start. Pretty soon, we thought we had cracked the case, but discovered that what we accomplished was only the tip of the iceberg. We were glad that the room wasn't a cake walk.

The game was designed expertly, the difficulty raising as we progressed. When we solved the puzzle with 23 minutes to spare, we were proud and celebratory! We got nervous there for a second. We were surprised how well we worked together and how the game catered to everyone's unique strengths. Abstract thinkers thrived but their problem solving wouldn't be possible without the help of the more linear thinkers. Both big picture people and detail oriented people thrive at Exodus Escape the Room and you need some of each on your time to be successful. The game really illustrates how different people on any team are valuable and encourages players to celebrate diversity.

When we escaped the room, we were greeted at the door by our host Tom who congratulated us. We got to take fun photos with props to celebrate our success. Tom told us about some of the other Escape The Rooms that are higher in difficulty and we've got the inside info for you. If you've never done an escape the room before, he recommends trying the Exodus room since it's the easiest in terms of difficulty. The story centers around the awakening of a war-loving Egyptian God at the New York Museum. If you've tried escape the rooms a few times, you might want to try their more advanced room the Baskerville Room which centers around Sherlock Holmes. If you're up for a challenge, you should check out the most difficult room, Masquerade which is set at a masquerade ball for a high-profile criminal at large.

Buy tickets for Exodus Escape The Room in NYC here.

Check out our reaction video here.

This multi-tasking beauty product is your new best friend