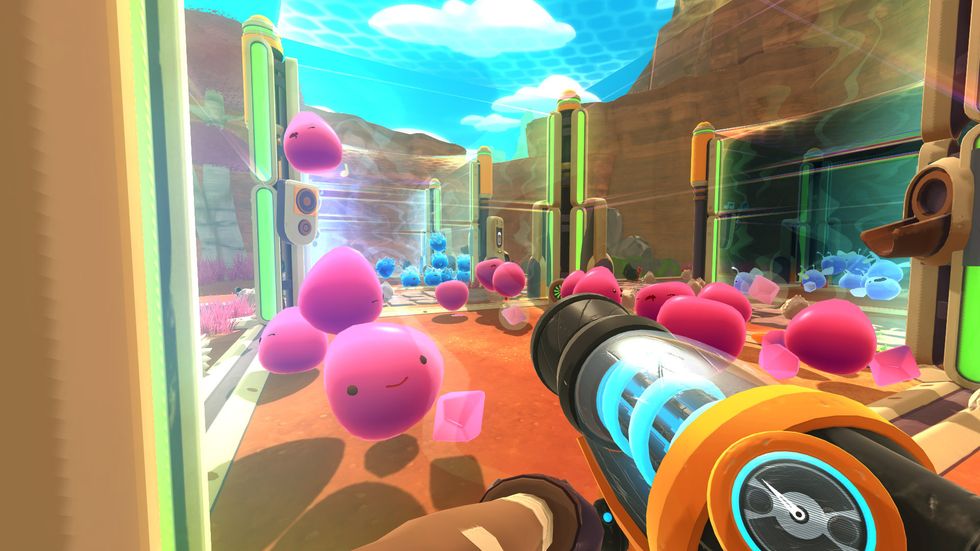 Slime Rancher: Why this adorable and addictive indie game is worth your money

With hours and hours of gameplay potential, I'm shocked this game is only $20.

So I'm a farmer, sort of. I own a ranch on a far away planet where I take care of adorable alien creatures called slimes. This is the premise for the new indie game called Slime Rancher. And it is worth every penny of the $20 I spent on it. (Honestly, considering how much gameplay it offers, I'm surprised the game only costs $20.) This is the cutest and most addictive game I've seen.

Slime Rancher's core gameplay consists of exploring the large, open world, sucking up slimes into your Vacpack, and placing them in corrals on your ranch to cultivate them. When you feed them they produce plots, which can be sold for varying prices. It plays as a first-person shooter with a twist, similar to Portal. While the gameplay is pretty simple, the game builds upon these concepts to add more features, create a huge world, and add dimension to its core mechanics.

I bought Slime Rancher on a whim after seeing a few YouTube gamers try it out. The moment I began playing, I was hooked. According to my Steam account, I played about 20 hours on the game within the first three days of owning it. While the map and storyline isn't nearly as expansive as Legend of Zelda: Breath of the Wild, I felt the same thrill of exploration while playing Slime Rancher. Within the game, you have to work to unlock new areas by finding elusive slime keys. Once you reach these new areas, you can collect new slimes — and by extension, new ways to earn more in-game currency. You use the money to set up new corrals and unlock upgrades to your character, including a jetpack. Some of these new areas also have some not-too-complicated puzzles to solve as well.

Slime Rancher currently features two game modes: Adventure and 5 Day Rush. Adventure mode is where you'll spend the bulk of your time exploring and building up your ranch. As far as I know, you can play this mode endlessly with no true end to the game. The small storyline does conclude, but you'll be able to continue maintaining your ranch after you reach that point. The 5 Day Rush mode gives you exactly five days in-game to earn as much cash as you can. This puts your skills and strategy to the test to optimize your ranch for maximum profit in a limited amount of time. In the future, the game will be updated to add a relaxed adventure mode, which removes the only truly dangerous enemy in the game: the Tarr.

But this game isn't for everyone. If you don't enjoy farming sims (even really basic ones), science fiction-based concepts, or first-person gameplay, this game is definitely not for you. There is some tedium involved with maintaining a slime ranch that might not be appealing to everyone either.

But if you want an adventure with a side of cuteness, you should check this game out. I still cannot believe it is only $20. There are games with less gameplay and depth that cost much more. Slime Rancher is available on Windows, Mac, and Linux as well as Xbox (but I'm holding out hope for an eventual Nintendo Switch port). Right now, you get four substantial areas to explore and many slime species to play with. The development team is also planning several substantial updates to be released in the near future with new areas and new slimes. If that wasn't enough, Slime Rancher also has a substantial community that has led to a complete Wiki and many, many hours of gameplay on YouTube. If you ever get stuck exploring (or need your Slime Rancher fix while away from your computer or console), there will be someone to fill that void.