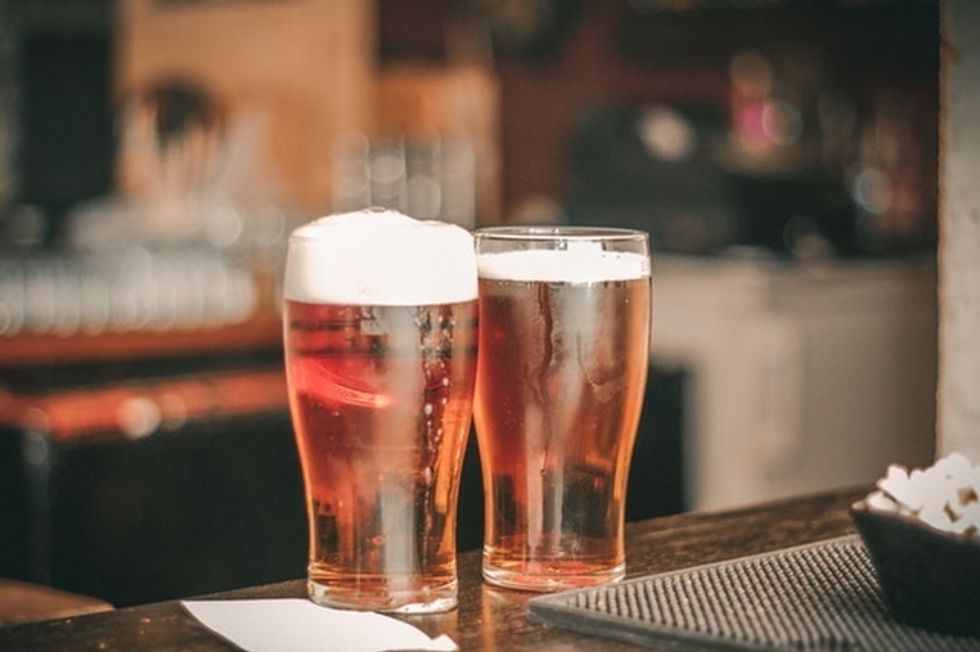 A cheer for the summer beers!

The three horsemen of the summer brew hear the plight of a man stricken by thirst!

'Sing, god and goddess of the sweaty sun, holders of the festive yellow ball that hangs above the high trees, your season has come, the accursed rains of the past five month have deserted us for Australia, chilly jacket wearing absconded for what remains of unmelted arctic frost; and we have put aside, at last, our casks of Cappuccino Oatmeal Stout and Winter Solstice Ale that once battled like wrestling toads in the snow, cheered on by the cold of heart; and we have thrown them aside, into the large tired-fueled fires that occupy our living rooms, once clung to in desperation, for we were so cold, once danced around in druid celebration, for we were so cold, now stamped out urgently with our broken bottles of seasonal stout, for we are warm! Our bones no longer chill! And our tongues are no longer coiled protectively in our throat-packets! They are dolled out like welcome mats for your blessing. We thirst!

So spake the Reviewer, in curdled ecstasy n' dehydration as it was so that his tongue spat out of its socket like the fleshy muscular organ of a common salamander. The gods n' goddesses of common worship, who had so provided such drink as Not Your Father's Root Beer. Bomber Variety to lighten the heat with their delicious sugars and inhibiting toxins so heard the cry of the Reviewer whose cry was dry as the Gobi Desert and had slipped into a stupor that turn his eyes into fiery balls n' his hands into kindling sticks n' body into that of a ghost that haunts cafeteria lines; vest into those hands did these gods and goddesses place not one or two bottles but a holy three; a trinity of flavor that the Reviewer would wake to find, 'is faith in both the gods and conventional numerology restored shorty before 'is quenching neck, thin like a wild turkey, could be full again. His faculties restored, the Reviewer took back to 'is yelling, drawing to him a plenty of wandering souls like a sitting dustpan will collect dust unaided.

'Cheer for the summer beers! Cheer for her three horseman who rest in my hand palms! The season of bitter brews and stealing precious joules from brothers for warmth has ended; gather round and I will tell you what my tongue was told by the good people at Small Town Brewing, Inc., makers previously of Not Your Father's Root Beer n' Not Your Father's Root Beer Bomber Variety! They have blessed us now with three drink, an increase exactly of fifty percent; go off, Georgio, and sacrifice three lamb, each belonging to a separate house of the Stach Families, they who did not believe. They who sent many a ship into war against the island of Small Town Brewing and caused so much blight upon the land. Sacrifice, Georgio, three lamb with your own teeth, so you too shall know what flavor is when you drink of the three drink that I will pour into the lips of all before you, Georgio. For your beliefs had wavered.

'Cheer for the summer beers! Cheer for her three horsemen who rest in my hand palms!'

'This is her first purchase and it is called Not Your Mom's Iced Tea, crafted so the script tells me of the finest tea leaves n'unspecified natural flavors. Bless, I kiss her lips and it is a bitter spit I taste; nair scent of the inhibiting toxin contained within to the specification of 5.0% ABV. Best served chilled or poured but I, reviewer from the mighty Island of Ghent, recommend drinking straight from the bottle on a day when the hanging ball in the sky has filled your skin with such salt.

'The second purchase, I fathom, is a women more remarkable than the last and her god-given name is Not Your Mom's Apple Pie, this one, Georgio, I will let you taste first when you come from your journey and done due diligence with the lambs; how the bakers of apple pie will laugh at themselves once they get a load of this; how the brewers of apple cider will cry mournfully at their loved ones once they get a first lick at the end of their tyranny; how apple salesmen in grocery marts will convert to a vengeful and proactive faith when their tongues coil around the flavor contained in the second of these bottles.

'The third purchase is of the name Not Your Mother's Strawberry Rhubarb and, like war, a bringer of tears. But these are droplets generated by joy; it is like dying and waking up alive. The inhibiting toxin is hidden as well as the needle inside the haystack and, Georgio, I will demand you drink this last because it is a pleasure that will ruin all life for you, that will make all future drink taste of the slosh donkeys drink. I myself-

On these words the Reviewer dropped to a speedy perishment and the crowd gathered around him dispersed with the quickness of game that hears the rife, save for the man addressed as Georgio who looked around awkwardly. He sacrificed three nearby lamb in confused respect to the wishes of the dying man.

Small Town Brewing's Not Your Mom's line is available at a beer store near you.