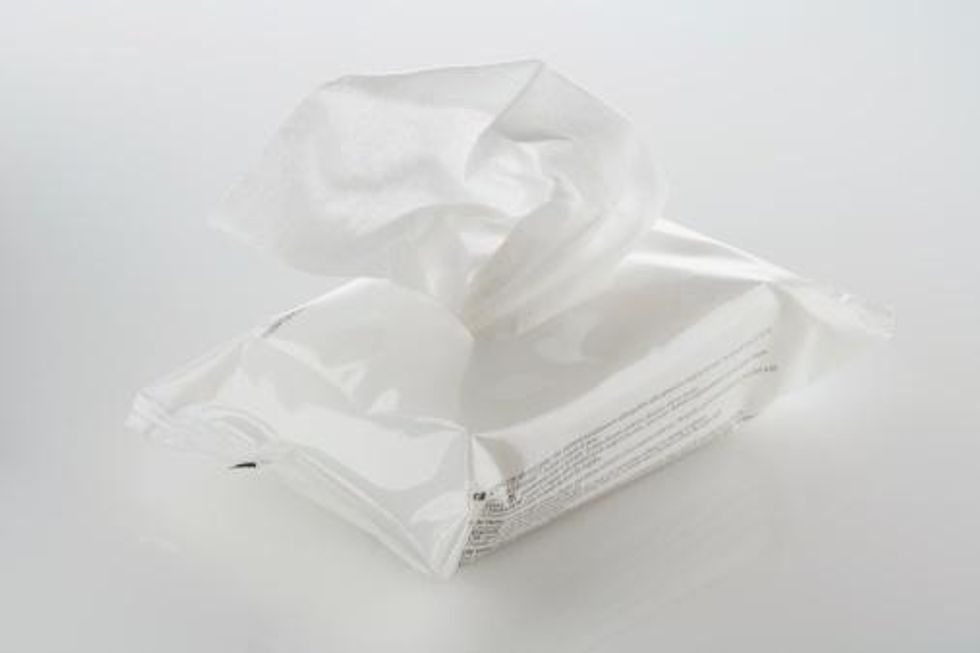 Regular stick deodorant can get sticky and leave marks — and get kind of bulky to carry. Even though deodorant game is pretty strong right now with sprays, gels and even powders that come in an array of different scents, beauty companies keep inventing new ways to stay fresh and smelling great all day.

That's why I'm here to review deodorant wipes for you! Either individually packaged or sold together, deodorant wipes can be a quick and easy way for you to freshen up at lunch or even replace a shower after the gym — but please use stronger wipes for that. I used two types of wipes for my experiment — one regular deodorant wipe by Pacifica on my left arm and one athletic level wipe by ShowerPill on my right arm that can theoretically replace a shower.

The deodorant wipes are advertised as vegan and "formulated without aluminum, sulfates, SLS, parabens, phthalates and petroleum." With coconut milk and other essential oils, the wipe smelled very nice. The wipe was thin and wetted through, but not soaking. However, I was skeptical about the effectiveness of all natural products because come on, they can't be THAT effective.

The athletic wipe was super intense — it's advertised to kill 99.99% of bacteria including staph and ringworm. The aloe vera and vitamin E infused wipe supposedly has no scent or residue and is alcohol and paraben free. When I unfolded the wipe, it was huge — like as big as your forearm huge. It was pretty wet and made of a very thick fabric guaranteeing a larger surface area coverage than the deodorant wipes. Even though they did cover a lot, there was not enough for my entire body like advertised. The wipes also did not smell too good — kind of chemically actually.

After I cooked breakfast, I went upstairs to wash my face and brush my teeth — yes, I do it after. Who wants coffee breath at work? I put the deodorant wipe on my left pit and had to wait a second for it to dry. Kind of annoying. But it did smell wonderful — kind of like I bathed my arms in coconut milk.

Then I put on the athletic wipe on my right pit. It took significantly less time to dry than the deodorant wipe, but ended up being kind of sticky. I couldn't get over the chemical smell — it was weird and just kind of unnatural. Also, the wipe was way too big and I felt wasteful only using it for my underarms.

I technically didn't have work today but had to drive in for a check in/impromptu interview. It was one of the hotter May days so of course, I was sweating like crazy. When I got to work, both wipes were still working at neutralizing the odor, but the deodorant side didn't do as much to block out sweat as the athletic side. Although, it is useful to note that neither of them were advertised as being an antiperspirant.

So the meeting took so much longer than I expected and the whole time I was worrying about my pits being gross. When I was finally released from the clutches of the beast, I ran to my car and immediately sniffed my underarms, fully aware of the lady parked next to me.

The deodorant wipe's effects were completely gone with only faint scents of a dying coconut lingering on my sleeve. It also smelled awful and I had some sweat stains on my sleeve — don't ask me why my boss didn't turn on the AC.

The athletic wipe fared better — the smell was less noticeable on that side, but there were still sweat marks. The chemical smell and the stickiness both wore off, but that could just be because I sweat it off.

I reapplied before I went to the gym at five and I'm happy to say that it lasted through two hours of vigorous sweating. The deodorant smell bothered me a bit but just because I wasn't used to smelling like a damn island while lifting. I went home and immediately showered — I couldn't subbing the athletic wipes in for a shower. It makes me feel icky, sticky and generally just unclean — or maybe that's just me?

All in all, I would only use the deodorant wipes as a pick-me-up and not an actual substitute for deodorant. Maybe the athletic wipes could work, but using a large wipe each time for such a small area of skin just isn't worth it for me — and storing and reusing them just sounds like a bacteria feeding ground. However, replacing a shower with them is completely out of the question for me.