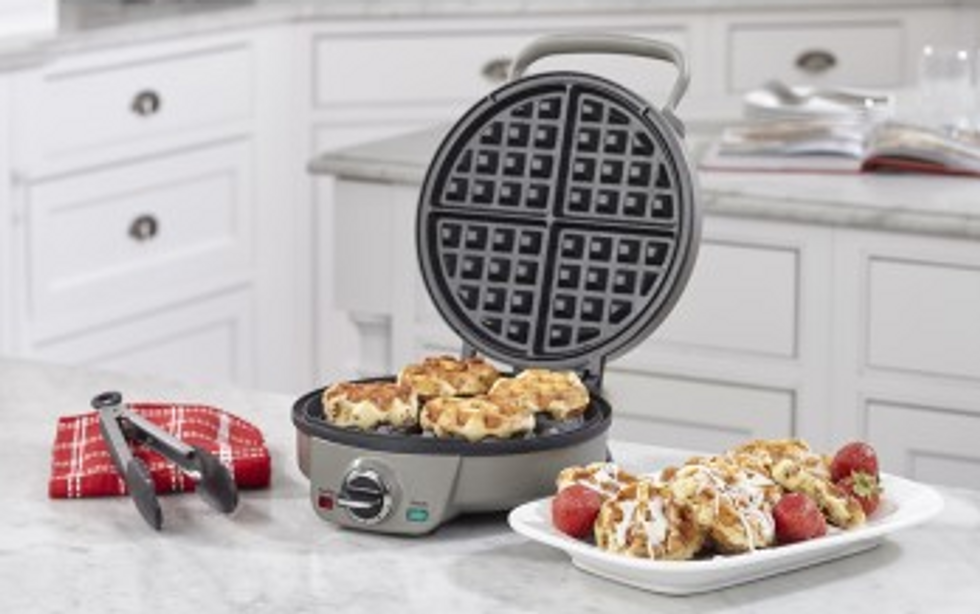 Is all you need a waffle iron?

It is a truth universally acknowledged, that a single man in possession of a good fortune, must be in want of a waffle iron.

Mr. Bubbly was of such an opinion that our best three-volume novel writers should task themselves with the subject until Barbara Smith nee Bubbly IV informed him that there was indeed a library was accessible to him through the anteroom. There were no good novels on the subject, Mr. Bubbly retorted in a sad huff and much phlegm, this I saw dripping from his lips in every memory of him that I had from my youth and early manhood. This was a man without a waffle iron, I thought to myself. A disgusting bag, rotted by decades of disease and neglect. Resigned to eating cereal from a pewter chalice in front of the television, to reruns of The Big Bang Theory. His tears sounded like heaves of a dying man, expelling dust.

The first iron I chanced to see was something I caught floating, royally and lillylike, in a complimentary continental breakfast spread. Its dirty metal lips were like the grin of an old man in the moonlight. Wily, serene beyond my years. I put hand between the grill and looked at the marks it made on me. I didn't wash my hands for a fortnight.

Mamma, I said that night. I want a waffle iron.

We were not of that sort she scolded me. Our waffles came in dingy boxes damp by years spent in the freezer. I was failing math and science and english too at primary school and, years later, at a mean place called St. Benedict's Reform School for Sepulchral Scholars, and I explained myself, to parent and rod-holding teacher alike, that it was because my waffles tasted like blueberry-flavored cardboard mixed with little dirt found on the roadside. In despair, I would dump my plate of Eggo in the trash can and look toward the figure of Mr. Bubbly, whose presence in my household was never exactly explained, in reproach. I mentioned the urgent need of waffle iron, how my lips were overcome with desire, my unwashed hands had developed a bad case of the gangrene.

He left the room in tears.

The years of my life, without a single properly ironed waffle since that fateful time in the continental breakfast spread of a Comfort Inn in Altona, dragged on like dead dog carcasses. I woke up in night sweats, feeling the phantom movements of my dear and since-amputated hand. My first wife, three years and two kids into our second house, tried to repair things with a spread of apple jam and butter-flavor fresh from the freezer and tasting, I was sure, of the devil's work. I didn't chance to find out and left immediately for Mr. Bubbly's country estate.

He was no longer the country squire I remembered from my youth, his eyes ached from years spent in the nearby dump. My boy, he said, fixing his belt made of a seatbelt kept together with aluminum foil. You mention those irons, he warmed me before anything else, and I won't just kick you out of this abounded country home, I'll put you where I put the owners, too!

We had an enjoyable five or ten years but that warm and crisp elephant ruled over our dimly lit paradise. I noticed the piles of George Foreman grills and off-brand pannini presses glued together by a khaki-colored sludge that he kept in the aft-rooms, places he forbade me to ever explore. Easters would come and go and we would wake up at 6am and stare at each other, examining the ways our skin had deteriorated in this abyss from civilization. We would, as a silent rule, not resume speaking until mid-May.

Who ended our silence with the bright-blue package in the mail with no fewer than four photographic representations of our unspoken-off metal grail, I will never know. There were few items to identify much of the insignia and I had forgotten much of what I knew of the linguistics of reading. Mr. Bubbly and I, by this time, had streamlined the bulk of our chitter-chatter to grunts and meaningful pointing but I could read the sunshine that now lit his deeply ill face when the CucinaPro Classic Round Belgian Waffler was by our door.

The man, and if we're being as honest as we should be in our memories as I well think we ought to be, and myself were cured of our insanity instantaneously. We hopped around the box like those little savages in the movies wrapped around a campfire for no less than a week. We, then, opened the box. I felt through a topographical display of black ridges, and it was the lover's touch after years dolled in the penitentiary for ghastly crimes. Life, which was pretty much a garbage dump of uneventful happenings until now, was suddenly a thing of possibility. I could become a man of business or the President of these United States, I thought. I could bathe.

The snaps of Mr. Bubely's thick and disgusting fingers awoke me. He was carrying a batter mix and would not fail to maul my remains if I didn't get out of the way. After some issue with the little red light in the top corner—was it on, was it off? we pondered at its meaning for some time— we could feel the heat rising in billowy and unseen waves of thermodynamic power. We poured the mixture and shut the thing and fretted like little children about it. We were just so happy. We talked of literature and sport. Mr. Bubely, I learned, followed the Cleveland Cavaliers religiously and considered them the name team of the land. The CucinaPro Classic Round Belgian Waffler brought promise of light chatter, the good times of a good breakfast though I hardly imagined I would ever suckle down a non-waffled item of food from now on. All matter of breads and cheeses and fine deli items, I would now succor to press between her lips. The CucinaPro Classic Round Belgian Waffler is a totem of possibility, the emblem of all that is possible at mealtimes.

CucinaPro Classic Round Belgian Wafflers are available at Amazon or wherever goodness is sold.