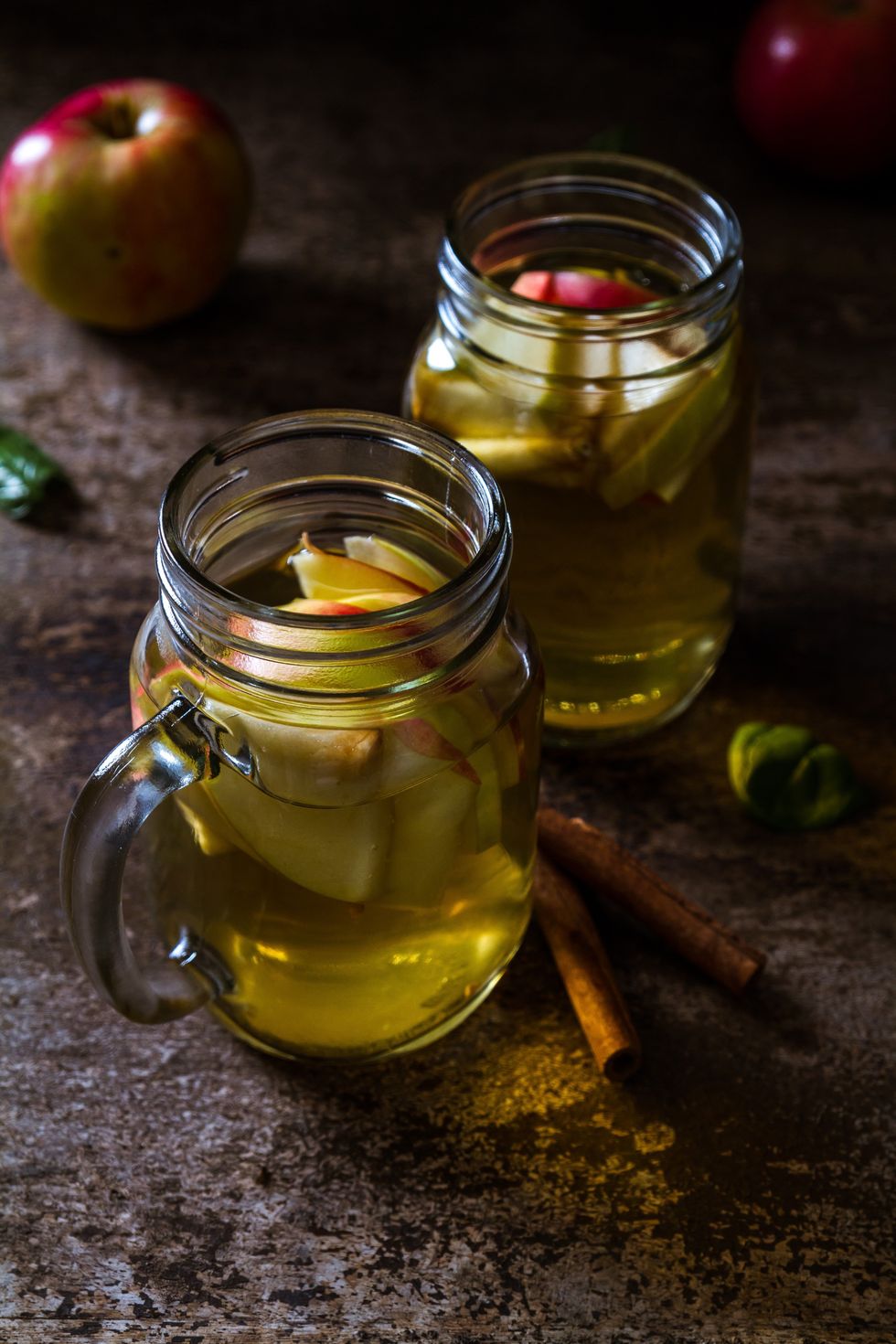 If you're anything like me, you're a big hard-cider fan. I'm always on the lookout for a fresh craft cider, an obscure brand, or an unusual import. But not everyday is a fancy cider day. Some days you just want to come home, crack open a six-pack with a few friends and enjoy a good drink without having to think about it. So what's the best choice for these occasions? When you want to keep it easy, and have a drink you can buy at your local corner-store, where should you go? Look no further, as I count down the top ten store-bought ciders.

For the purposes of this list, a "store-bought" cider will have to meet the following criteria: hard-cider available in standard 330ml can or bottle; retails for $12 or less for a six-pack (NYC pricing); and widely available at corner-stores, delis, Rite-Aids, etc. without having to look too hard. For these reasons, a couple of my favorites have ended up off the list, but nevertheless, we persevere.

Cider Boys makes a tasty drink. Their standard "First Press" line (available year-round) is an easy yes when you're offered a cider. It does exactly what you expect it to do, and tastes how you expect a cider to taste. It falls in to the common mass-produced cider trope of being a little on the sweet side. Not something I'm necessarily against, but I like a little more texture to my flavor. Their seasonal flavorings (peach, raspberry, cinnamon, blueberry) have more of that texture, but are harder to find on a regular basis due to being, well, seasonal.

This might be a slightly contentious pick, because Ace market themselves as a craft cider. I'd hate to step on their toes, as I have enjoyed their drinks on many occasions, but they do meet all my above criteria for being a store-bought cider. No disrespect intended. Their standard product is above average, their pear cider tastes great, and their Joker Cider is a unique flavor indeed. I don't love their pineapple variant, but then I'm not a fan of pineapple in general, so that's hardly their fault. They're still a little more on the sweet side than I like, but they are a favorite of many.

This is technically a British import. However, it tastes different from the Strongbow you buy in the UK. The American version is definitely sweeter (apparently Americans like their cider more sugary), and available in more flavor variations. Some of these are quite tasty, particularly their raspberry and strawberry cider. It's a great drink for a summer day, and is becoming more and more easily available in the States. It earns a slightly higher place on the list because of the nostalgia value for me. It was my regular bar drink when I was living in England, so it has that place in my heart.

The Irish standard. Less sweet than a lot of ciders available in America, and with a simple, uncomplicated taste. Goes down easy, no frills attached, great to pull out of a cooler at a barbecue. When I first moved to the States, it was the cider on tap at several bars, however in the last few years it's become mostly only available in bottle form. I'd love to know why, because I used to enjoy ordering a pint of this at my local, and now I have to think twice before getting it at a bar if I want to get my money's worth.

When it comes to branding, it's hard to beat Angry Orchard. Whatever you may think of the drink, it's the cider that is everywhere. If a place sells cider, they probably sell Orchard. The logos are brilliantly designed, the name is cool, their flavor variants all have cool names… Angry Orchard is the USA's most ubiquitous cider. That said, they are not the best in a taste test. They are super sugary, to the point where the drink is basically an alcopop, and there isn't a lot of subtlety and texture to the flavor. The green apple cider they do is my favorite of their line, and their lower sugar 'Stone Dry' is a nice change, but they're still not the best tasting ciders out there. They are, however, almost always the easiest to get. I have so many fond memories of drinking Angry Orchard, simply because it was there at a time when I wanted a cider. For that reason, it earns this spot on the list.

Ah oui. Le Stella Cidre. A clever bit of branding. As with Stella Artois beer, Stella Cidre is meant to convey the idea that you're drinking fancy, even though you're not paying for fancy. It's a pretty good flavor. Although it is sweet, there is a richer quality to the taste than a lot of other ciders. It also looks great. The bottle is nicely detailed, the logo is suave… and it's called cidre. The branding is really what sells this drink. Even though I've done it a million times, I still get a giggle from saying cidre in a bad French accent. It may be the main reason I buy it, honestly.

I almost put Woodchuck at number two. In fact, if I'd done this list a couple of years back it may have been number one. Woodchuck Granny Smith is one of my favorite ciders to drink, very tart and refined in taste. Their Winter Cider is always a treat when I find it. I don't think I've drunk a single cider of theirs that I didn't like. Even their standard Woodchuck Amber has a more full, rounded taste than other comparable ciders. However, this past year they changed their logo and bottle labelling, and I have to say, I miss the old labels. I know they looked old-fashioned, but I saw that watercolor woodchuck on the block color background and I felt safe and ready to curl up on the couch with a drink. Their newer, more cartoony logo looks like a Saturday morning cartoon. It's a clear marketing move to keep the brand hip, and I'm just not a fan. I understand staying relevant, I really do, but I don't want to feel like a child when I drink my alcohol. Still tastes great though.

Down-East, like Ace, markets itself as a craft cider, but retails in such a way that it still fits my criteria to be here. It is also the only cider here that comes cloudy as standard. While sweet, the flavor is layered, and full of subtleties in a way that not many ciders out there are. Its branding and look are a little bit hipster/nondescript, but the taste is so good I don't care. They've started serving it at a favorite bar of mine, and I will drink pint after pint until someone stops me. It's a darn good drink.

Again, markets like a craft cider, but retails not like a craft cider. I have to admit, the first time I had Harpoon cider I was not a fan. I thought it tasted weird, as it was not at all what I was expecting. However, every subsequent time I have drunk it, its unusual, slightly bitter taste grows on me a little bit more. Its branding and logo are on the dull side, but every time I drink one of these I find myself pausing to enjoy all the subtleties in its flavor. And I can get six of them at my local bodega for $10. Harpoon has me hooked. Pun intended.

I love Doc's Draft. Oh so much. The champagne yeast, the gilded lettering on the label, the understated logo, the gold foil over the bottle cap… and above all it tastes fantastic. To the point where I drink less overall when I drink Doc's, because the taste is so satisfying. So many alcoholic drinks are a Wildean pleasure, in that the joy is that they make you want to drink another one. Doc's is a grown up pleasure, in that you drink a couple, feel like you've done something good with your life, and then stop drinking. However, while often available for purchase, they do not retail in standard alcohol denominations. When I write an article about craft ciders they will definitely be in there, but until then…

It sounds cool to order. It tastes great to drink. The logo looks like it should be a band's album cover. Original Sin is just great. Another craft brew that slips sneakily in to this list, but darn it if I don't love it. The flavor is a perfect blend of tart, with just enough sweetness to keep it fun. Back when it was first made, the bottles had a paper snake logo hand wound around the bottle. As demand grew, this became impractical to do and the owner had to compromise with a slightly less awesome design, but the great flavor stayed. I mentioned that Doc's makes me feel grown up, and the new Woodchuck logo makes me feel childish. Original Sin makes me feel exactly the age I am. It's acerbic, yet yielding, almost watery in taste, and yet somehow full of flavor. This cider may well have been the reason Adam and Eve said yes to the snake. And I consistently find it available in bodegas, delis and pharmacies. It's my top pick on a very competitive list.

Happy drinking! (Please do so responsibly)