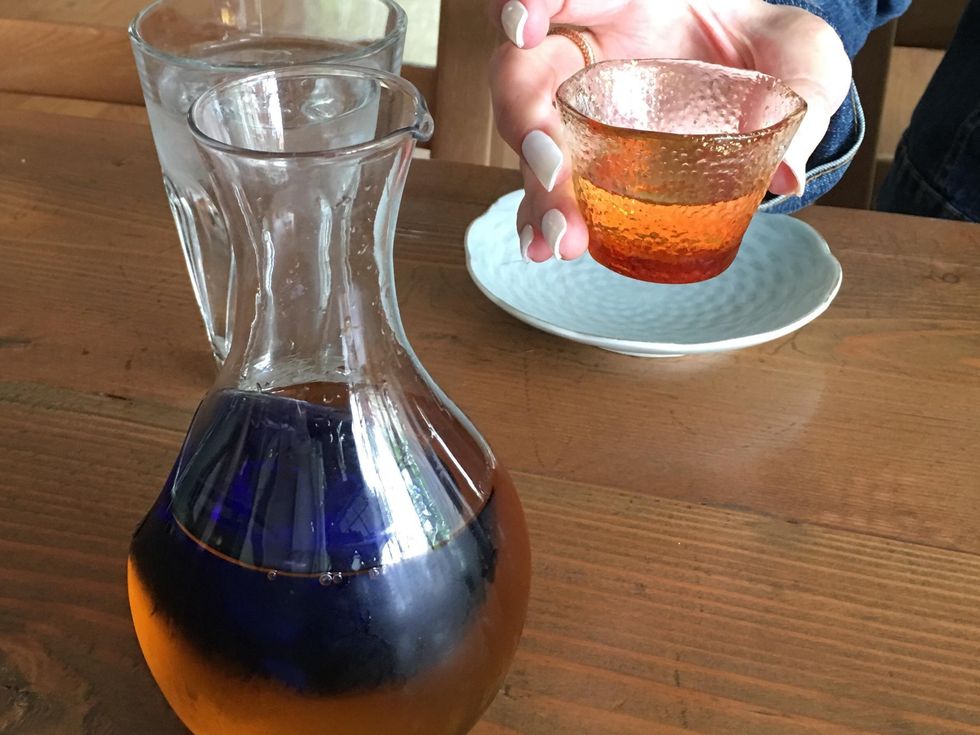 Sake to me! If you love dining out (or in) for Japanese food, particularly sushi, then the idea of washing it down with some sake may have crossed your mind. Whether you prefer your sake warm or chilled, the rice wine pairing with Japanese cuisine is a match made in heaven, or at least in the section of the afterlife where "adult" beverages are brewed.

Sake is a wonderful sipping solution that pairs marvelously with Japanese fare, and there are too many varieties to even think about covering in one brief review. That's why I'll make it simple for you. Drink Ginkoubai "Hannya Tou" plum liqueur and you will be forever grateful for the unique sake-based beverage that you would not have likely ever heard of, let alone ordered, at your neighborhood Japanese restaurant if not for having read this.

I recently moved to the North Fork of Long Island. A Japanese mecca of Asian delights? Not exactly. But the best sake tasting spot/sushi restaurant I've ever set foot in is nestled away in Greenport, NY, a low-key waterside town known for local seafood, wineries, and a non-pretentious small town atmosphere.

While dining at this lovely restaurant, my husband and I decided to splurge on some sake, not that it was all that pricy, but the idea of an afternoon libation seemed indulgent. The restaurant's sake list was extensive, so by reading the detailed descriptions, we honed in on Ginkoubai "Hannya Tou" plum liqueur.The menu described it as, "Infused with red chili pepper. Addictive sweet and spicy flavors." We were intrigued and thirsty and ordered some to share to pair with our sushi, sashimi, and special ramen noodles.

"Addictive" was spot on. As spicy as the blend of sake and shochu was, the balance of plum-based sweetness made this drink the perfect balance of everything you've ever wanted in a Japanese beverage, or any beverage from anywhere, for that matter. It was smooth, crisp, and unlike anything that's ever passed through my lips, and for better or for worse, I've sampled a heck of a lot of sake.

Sad to say, Ginkoubai "Hannya Tou" plum liqueur isn't exactly a staple on menus as would be a Budweiser or a house chardonnay. That said, who needs to dine out to find the perfect drink to go with dinner. As long as you're "of age" order a bottle (or more) online. A little goes a long way with this one and at just over $30 per bottle, the price is fair and affordable.

Some descriptions of this drink claim it's an after-dinner sipper, but the restaurant I dined at offered it alongside lunch items and the pairing was sublime. Who says what you ought to drink at a particular time anyhow?

Get this sake and plum blend of liquid gold. It touches every taste bud and makes every bite of your Japanese meal even better. Bottoms up to something special thanks to its sweet and spicy kick!