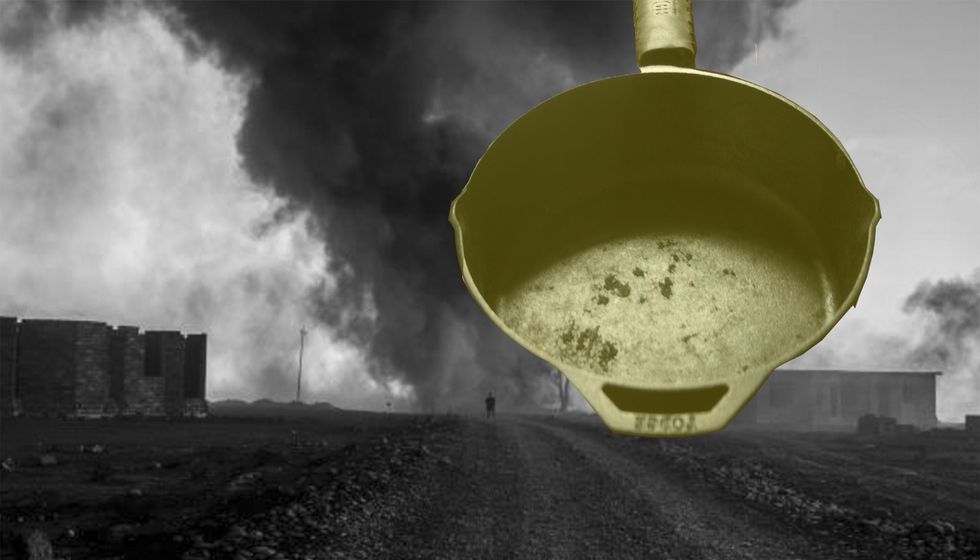 Sifting for the last skillet at the end of the world

The end of the world don't mean the end of sausages.

Franklin Pierce said this. To me, and to Jazz and to Hardly Davidson and to everyone else too but we tipped our ears on the sweet juice of his words because we were the food crew. Franklin Pierce was not the kind of man to say things twice, once to everybody and then, again, to subjects of his address. I speak direct, he would preface every sentence. Franklin Pierce had once been a debate coach at an economically disadvantaged neighborhood.

Franklin Pierce, however, did not seem much bothered to do much more than the issuance of these directives, a distribution of power that I, myself, didn't seem too keen on, muchly. But this is America, sometimes you're ninety-nine and sometimes you're top percent. That ,there, are the facts, a statement that he liked to end speeches with, and are expected to hold even if Wall Street is little more than a finely coifed crater sliding slowly into the sea.

Hardly Davidson and Jazz, I had figured but never asked, were a couple which left me, as folks would call, a third wheel. At least before the automobile burnings of my early adolescence. That story, I knew correct from the deflated tire lips of Hardly Davidson himself. In a coughed up explanation of his own name, he told me he had been the world's foremost expert on that vehicle and all kinds of vehicular devices, having amassed a collection of such and all vehicles no smaller than three parking garages of space contained, at the time, somewhere inside the patchy atomic archipelago that was once a peninsula called Florida. Certain vehicles, he told me in confidence, whenever Jazz would be out peering inside a stanked-out refrigerator that we were way too chicken to go near, had been displayed in retrospectives on the art at place called the Guggenheim during the early Bush years. Course, that hardly matters now, does it? He would guffaw, whenever he told this story, like a dying duck.

Whenever he would cough or maybe sneeze or in some way adjust his body built like a tank at an abandoned Army Depot, he would scratch a carefully-trimmed bushel of hairs that he kept stashed on his chest. Now, you wouldn't think it, but Hardly Davidson was the most well-groomed man in all New Westchester. For that and many other equally thought out reasons, I thought of Hardly Davidson as a natural leader in my efforts to unseat Franklin Pierce. Myself, I saw as a kind of grand vizier figure, kinda like the tall hat in Aladdin, which is why I had no interests in messing up his thing with Jazz even though, if anyone asked with a bible in their hand and a command for me to swear it, I would tell the flat truth about her: she was one percent, that's right.

What the skillet opened, I realized, was a Proustian reverie

I kept to this sophisticated story, of caesarian conspiracy, because I could imagine exactly the kind of tale that would stalk us otherwise. That rom com bull that divides the proletariat and starts world wars is what it is. If the end of the world don't mean the end of sausages, it certainly don't mean the end of discourse on power dynamics and the ways in which it's been finagled out of hands of the working man. Course it was right then, plum in the middle of these thoughts, while Jazz was tossing through an abandoned Amazon warehouse with a semi-automatic rifle in her hands amidst Hardly Davidson delivering me some education of the late '80s bust in the art market, that we all saw it.

Hardly Davidson punched me right in the gut, having interrupted the scene he was setting for telling me about the rise of Selma Golden in the curatorial world, in order to correct me. That ain't no skillet man, he announced, his voice thick like he had explored a jungle or an Australian outback. Jazz, her eyes had turned straight into shining little meteors, glass rhinestones you'd spend all day scouring a beach to find.

What the skillet opened, I realized, was a Proustian reverie inside both Jazz and Hardly Davidson. They were seeing, in the Lodge Cast Iron American Made Since 1896, a glimpse of an America that was all gone, an image of the thing that had been torn asunder by civil war 2.0 beta version and strife.

It was like eggs in the morning, Hardly Davidson said. Chicken-eggs, too, he clarified.

They talked about the features of the long-extinct product for some time and I had nothing to add, having no memories of hot flame licking cast iron or the taste of baked-in seasoning, features that Hardly Davidson elucidated were intrinsically specific to the Lodge Cast Iron American Made Since 1896. Jazz warned me, like a mother scolding a child clinging onto a formica table top back before all plastics were burnt for fuel, to use mitts whenever operating the device myself.

Now, honey, those come with a nice leather mitt right there, that come conveniently with the handle, placed there for this purpose, but it might not be enough for your little hands. There was worry in her voice but love and admiration too.

Jazz had never before called me honey or even seemed remotely concerned for my safety. Hardly Davidson had begun, of his own accord, patting me on the head, with fatherly concern. You know, he said warmly, the Lodge Cast Iron American Made Since 1896 has been around for a while. He told me something of the company's history and its importance, telling me this like a public school history teacher, after class.

I went forward and wondered about the revolution. The fight against Franklin Pierce's reign on tyranny over all New Westchester. I tried to lift the Lodge Cast Iron American Made Since 1896.

It was very heavy.

The Lodge Cast Iron Skillet can be found on Amazon.